Here’s a different sort of grocery store math than you’re probably used to. A high school math teacher in Santa Cruz, California drew up a lesson plan for teaching students to answer the question: “which checkout line is the fastest?” Clearly, this is education after our own hearts. You may have your own anecdata on this subject, and even try to make predictions as you choose your line and thus your destiny, but that is no match for science.

The conclusions, after studying the lines in his local store as well as cash register data: it’s people that slow down the checkout process, not items, and the express line is slower when all other things are equal.

The express lane isn’t faster. The manager backed me up on this one. You attract more people holding fewer total items, but as the data shows above, when you add one person to the line, you’re adding 48 extra seconds to the line length (that’s “tender time” added to “other time”) without even considering the items in her cart. Meanwhile, an extra item only costs you an extra 2.8 seconds. Therefore, you’d rather add 17 more items to the line than one extra person! I can’t believe I’m dropping exclamation points in an essay on grocery shopping but that’s how this stuff makes me feel.

We know the feeling!

What I Would Do With This: Groceries [dy/dan] (via Economix) 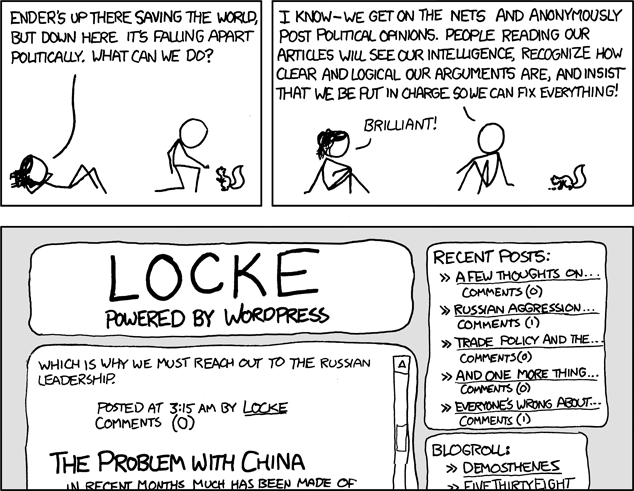 Dear Peter Wiggin: This letter is to inform you that you have received enough upvotes on your reddit comments to become president of the world. Please be at the UN tomorrow at 8:00 sharp.

Looks like they thought they were a Buy More, not a Best Buy….

Can I apply to work on the nerd herd?

It all started out as a good-natured, if ill-advised Best Buy promotion to encourage employees to entice customers into signing up for store credit cards. But it ended up in a fracas of verbal and physical assaults. Allow Best Buy employee “X” to tell a tale of mayhem at what was supposed to be a pleasant evening at Best Buy.

On the night of the 30th, the entire store had a meeting to attend from 7:30-9:30. A few months ago, we had started a store wide contest that stated that any employee who got the most BBY Credit Card applications got to throw a pie at the manager of their choice. This contest ended on the night of the meeting, and the winners were given pies to throw at the manager of their choosing. It is important to note that all of the managers were aware and consented to this contest.

You probably have guessed that this did not go very well.

One of the managers, [Manager 1], came to the meeting late and dressed in what only can be defined as “Thug Clothing”. Seeing as she has always lectured and disciplined employees on being in on time and dress code, she was an obvious target for the pie contest.

One employee, whom I will call [Employee 1] won in his department and was given a pie. Immediately, [Manager 1] exclaimed “If ANYONE throws a pie at me, I’m gonna KICK THEIR ASS!”. We later found out that she was not joking, as many thought she was at the time.

So, in order to reduce a mess, we all head out to the front of the store. The store was currently closed and it was around 9:10 p.m. It is important to note that all of these people were punched in and working on the clock when this happened. About 40 or so witnessed it.

[Employee 1] walks up to [Manager 1] to throw the pie, she loses it and slaps it out of his hand. Ironically enough, this causes pie to spill all over her. So, naturally, she decides to chase [Employee 1] in the store yelling [expletive that means “your father”]! Pie debris is spilled everywhere at the front entrance.

The contest continues outside and [Employee 1] joins the rest of the crowd to watch other managers get pied. [Manager 1] shows up behind [Employee 1] and threatens to kick his ass yet again and begins to cuss him out. Another employee walks up behind to talk to [Manager 1]. Being the crazy bitch that she clearly is, [Manager 1] thinks this other employee [Employee 2] is trying to throw a pie too. So, she turns around and begins to cuss him out and threaten to hurt him, even though the guy did absolutely nothing.

In an act of sheer stupidity, a supervisor named [Manager 2] jumps out and says “I got your back, [Manager 1]” and begins throwing sprite bottles at random people. You know, to add onto the stupidity, I suppose. Two cashiers get hit with the sprite bottles (and the sprite)! [Manager 2] begins picking fights with other people and ends up calling one employee a [very rude slur.]

Did I mention? This entire time, the General Manager is nowhere to be seen. He didn’t even come to his own meeting.

About 13 employees have gone to BestBuy HR about this. While the investigation is “pending” many of us fear the GM will give both of these people a slap on the wrist and continue with business as usual. This is because the GM is very close with these people. We feel that if Consumerist made people aware of this, perhaps HR will act differently in the situation and might actually solve this problem.

Why do BestBuy employees seem to be featured on Consumerist so often? Maybe it’s because of this. Look who we have to work under. You may have a bad experience with a manager and never shop at the store again. Given this economy, many of us have no choice but to listen and witness this bullsh*t daily. These are both examples of people who clearly should never have worked in retail, but somehow actually got authority of some kind. I would work elsewhere, but I currently have no choice.

X’s story sheds some light on just how badly Best Buy management wants to sign you up for their credit cards, as well as how little oversight there seems to be — there’s no chance the pie-in-the-face thing was corporate policy. Or is there? We e-mailed Best Buy CEO corporate:

We received word that managers were offering the chance for employees to hit one of them in the face with a pie if they got the most customers to sign up for a credit card. Can you comment on whether this was corporate policy, and assuming it’s not, also say what is being done to stop this from happening again?

And got this cryptic reply from Susan Busch, senior director of public relations:

Having fun while being the best is one of Best Buy’s core values. Our employees are both encouraged and empowered to make sure fun is infused into all aspects of our work.

Corporate-endorsed pie and soda bottle fights that spice up what would have otherwise been a dull sit-down meeting? Is it just me, or does that particular Best Buy seem like a fun place to work? Well, if it weren’t for the violence, profanity and hateful slurs, anyway.

TAX DEDUCTIBLE DONATIONS: If you enjoyed this post, or this blog, please make a secure tax-deductible donation directly to the American Diabetes Association. Please read my personal story about life as a diabetic and donate today. ALL PROCEEDS will go to Diabetes Research. 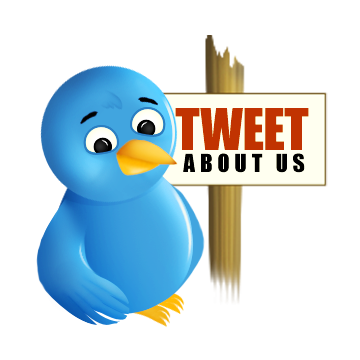 Everyone collects utilities, and most folks have a list of a few that they feel are indispensable.  Here's mine.  Each has a distinct purpose, and I probably touch each at least a few times a week.  For me, util means utilitarian and it means don't clutter my tray.  If it saves me time, and seamlessly integrates with my life, it's the bomb. Many/most are free some aren't. Those that aren't free are very likely worth your 30-day trial, and perhaps your money.

Personal Plug: Discover more cool tools and programming tips on my weekly Podcast with Carl Franklin – Hanselminutes (Podcast Feed/Podcast Archives) – "Our show is guaranteed not to waste your time. Free free to listen in double speed and waste half as much."

This is the Updated for 2009 Version of my 2003, 2005, 2006, and 2007 List, and currently subsumes all my other lists. Link to http://www.hanselman.com/tools when referencing the latest Hanselman Ultimate Tools List. Feel free to get involved here in the comments, post corrections, or suggestions for future submissions. I very likely made mistakes, and probably forgot a few utilities that I use often.

NOTE: Please don’t reproduce this in its entirety, I’d rather you link to http://www.hanselman.com/tools. I appreciate your enthusiasm, but posts like this take a lot of work on my part and I’d appreciate that work staying where it is and linked to, rather than being copy/pasted around the ‘net. If you’re reading this content and you’re not at http://www.hanselman.com/, perhaps you’d like to join us at the original URL?

"But these go to eleven…" – Nigel Tufnel

"Windows 7 is so full of win" – Overheard at Starbucks

"Sometimes I think sensitive people are more capable of reflection because they have to shut the world out to function." – @mfeathers

Some people, when confronted with a problem, think "I know, I'll use regular expressions." Now they have two problems.  – Jamie Zawinski

Scott’s Note: Personally, I’m all about Windows 7 now, so I’m not using a 3rd party launcher any more as I don’t see the need. However, here are some stand-outs I’ve used in the past that you might want to check out.

"Unix is user-friendly. It's just very selective about who its friends are."

"Never trust a computer you can’t throw out a window." – Steve Wozniak

"The Internet?  Is that thing still around?" – Homer Simpson

"I didn't know anything about this. So I called up some folks at Microsoft, and apparently we make a lot of different image editors." – Steve Balmer

"So is Outlook the Operating System now?" – Me

Contents Copyright © 2003-2009 Scott Hanselman – Please link, don’t copy this list…hyperlinks to are most welcome. Please follow me on Twitter.